Yesterday a flock of knitters from the rainy north descended to Portland to partake of the riches our yarn shops contain. A number of us from the PDX Knitbloggers acted as guides for the group who arrived by Amtrak and visited Knit/Purl, Knit Knot Studio, and Dublin Bay. Bobbie, Melissa, Judy, and others met them at Union Station and maps in hand the Seattle knitters spread out over the Pearl District with visions of yarn and Powell's Books in their heads. Unfortunately I forgot my camera so I have no pictures. The others haven't posted yet but trust me there are some great shots.

I didn't intend on purchasing any yarn as I have more than enough. But one never knows what you'll find when you just poke around. I certainly didn't expect to find this. 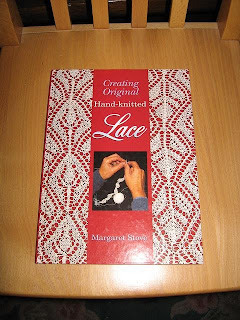 It made my day. So happy! 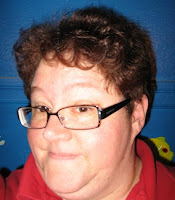 A milestone has been passed. I got my first bifocals. I'm glad I was able to find lenses large enough to make them stylish. So far I'm getting used to them but then I just got them in the mail a couple of hours ago. We'll see how I fare tonight while I watch the idiot box and work on a project. 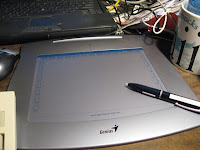 Another tool has been acquired to try to outwit the tendonitis troll. This is a tablet mouse that I now use at home instead of a regular mouse. The stylus has a point that acts as the left click button. The side button is the right click button. It's been very easy to use and recommend it to my fellow knitters who do a lot of computer or similar work with their hands. Since getting it I have not had any issues with my hands falling asleep while I'm sleeping or tingling in my arms. My thumb and forefinger on my right hand for a while were getting numb but that has gone away. Whee!

This weekend, a group of knitters is descending from the murk of Seattle to do a yarn crawl through some of the shops in downtown Portland. Members of the PDX Knitbloggers will be accompanying them, guiding them to sights and good eats. So if you're in the Pearl District and see a gaggle of chatting women with purpose in their faces, it's best you move aside. We want to see yarn! (I for one will be stationed at Dublin Bay).

After a weekend of encouraging a newbie knitter and enjoying the company of my fellow singers, I didn't relish returning to work. Fortunately I had other things to keep my mind busy, such as what was I going to do with the time between starting up on the Ethnic Knitting Norwegian Sweater KAL and now? 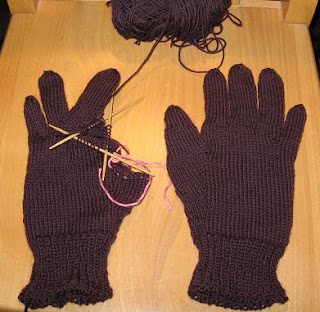 I have a pair of gloves in Louet Gems that are nearly completed. 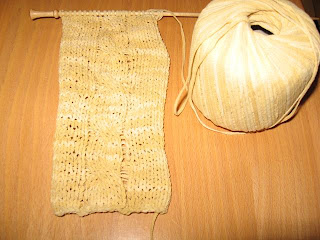 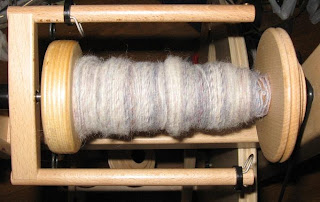 I have Mystery Roving on the Louet.

So in the span of less than 24 hours I get two emails that will add a couple of projects. They're paid projects so the other stuff goes on hold when the projects arrive. In the meantime I have to decide which will I finish first: the gloves or the cover? I like the gloves but they slide on the steering wheel. I like the cover but it doesn't keep my hands warm. 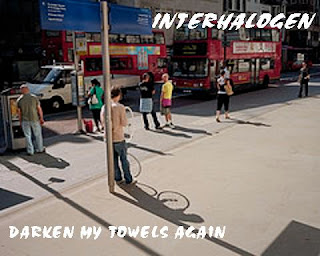 Cindy of Knit For Joy tagged me for this one. I found it a lot of fun. I've played with imaginary band names and drawn album covers for them so doing this one was going back to old pleasures.

You are about to have your own band's CD cover. Follow these directions to the letter. It's fun and requires no thought at all. Go to......

1. http://en.wikipedia.org/wiki/Special:Random The first article title on the page is the name of your band.

2. http://www.quotationspage.com/random.php3 The last four words of the very last quote is the title of your album.

3. http://www.flickr.com/explore/interesting/7days/ The third picture, no matter what it is, will be your album cover. if it will allow you to copy and paste it

Use your graphics program of choice to throw them together, and post the result as a comment in this post. Also, pass it along on your own blog, because it’s more amusing that way.

I think my band is a college band into a different groove from the usual genres. Think REM or early Elvis Costello. I for one would love a band named War Kittens, derived from the current CapitalOne campaign that features evil scientists creating vast armies for conquering the world and the last thing they need to do is design their card. Watch for the guy in the bright red padded suit with the cyborg minion beside him. Makes me giggle every time.

For those of you waiting for Mystery roving results: 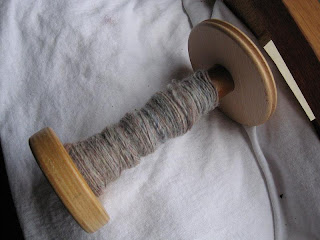 A bit uneven, but after watching Buster bury his head in the bags of batt it will most likely turn into a cat bed. It's good for practice though. It's slick and requires a lot more twist than I expected. Great practice for me.
Posted by FiberQat at 9:56 PM 1 comment:

A jaunt in the valley 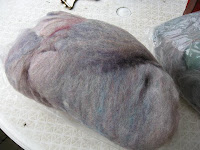 I received an email from a friend who asked if I had done business with Fantasy Fibers. He was interested in their mystery batts. I had seen Fantasy Fibers at OFFF (it's in their back yard practically) but had not investigated their mystery batts. Further investigation indicated that the shop was not open on Saturdays but if an appointment was made someone would be there. I arranged to be there this Saturday to check them out.
A fiber jaunt is fun but it's more fun with a buddy. I emailed Bobbie to see if she would be interested and sure enough she was. There was an alternative reason to meet up with Bobbie: her Toolman was done making a floor lazy kate for me and at the time I learned about it I wasn't sure if I was going to meet up with her at Wednesday night knitting. It turned out well. I met her downtown then we headed for Canby. 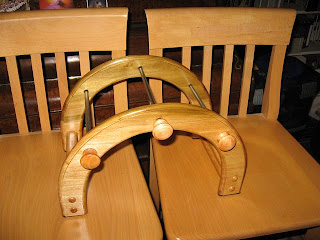 Fantasy Fibers is a processing mill. Their main business is processing fiber for people to specification; even spinning it if desired. The drive out to Canby was wet and cold with some of the raindrops looking like melted snowflakes. I had no idea what to expect when we got there but it would be mounds and mounds of fiber.

We did find mystery batts and at first glance they look like a blended carded mess of fibers. Wool, alpaca, mohair, bits of tencel and angelina, you name it. There were faint streaks of dyed fiber in the batts with some more than others. It would make one wary but Bobbie was enthusiastic about the adventure of what may come out of one of these things. At $1.35 an ounce it wasn't like we were spending a fortune on what may end up being cat bed lining. I took home a couple of pounds. We opened Bobbie's batts at her house and there's quite a bit of variety of color in them so they promise to be an interesting spin. 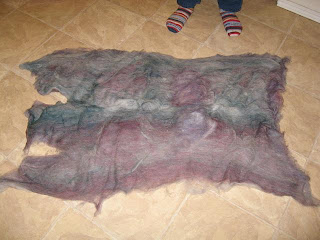 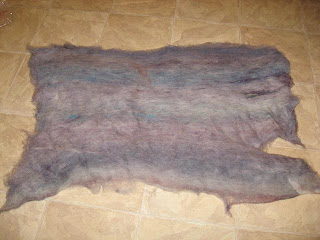 The same batt turned over 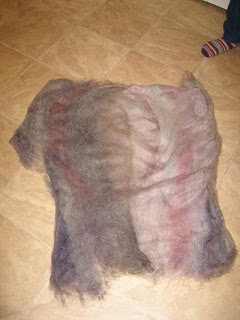 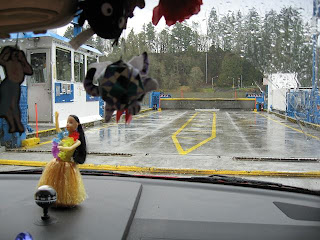 We made a side trip to Woodland Woolworks via the Canby Ferry, one of the few river ferries still operating in Oregon. I had never been on it so it was a bit of touristy fun. The storm waters that were filling the creeks and rivers made the Willamette high and full. We could feel its power as we crossed but we were safe in a matter of minutes. As we drove past farms and fields we saw downed trees and limbs from the recent storms. There's still a bit of a mess out there that is being cleaned up and the winter storms are far from over.

It's hard to walk away from Woodland Woolworks emptyhanded. Even more so when you want to get something from them and can't pull yourself away from other goodies. I did find a treasure of Dale of Norway sweater patterns with traditional motifs that I couldn't walk away from. Some Mountain Colors targhee also ended up in my basket. And all I wanted was a set of ultra short dpns for working the fingers of the gloves I'm making. I'm such a pushover.

The rest of the afternoon was spent at Bobbie's and Toolman's home. Toolman had made up a scrumptious batch of pasta with Italian sausage, bell pepper, and other goodies. He unveiled the lazy kate which is just the way I wanted it (see pic above). Bobbie and I knitted while Toolman puttered with his tools before I headed back to the barn with my load. Tomorrow when the light is better I'll investigate my batts and see what I came home with.