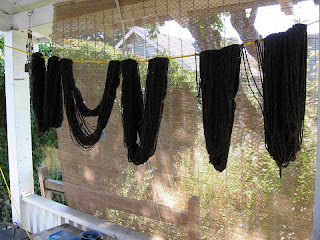 is that it dries washed yarn like nothing else. We don't get weather like this very often -- maybe once in a couple years or so -- but we don't deal well with it. I'm talking 100 degree weather for several days. It turns people into zombies, then grumps, then ticking time bombs. And since a good number of folks don't have air conditioning here in Rose City the chance of trouble in the usual places is increased. Fortunately I don't live in one of those places so I'm safe. Yesterday the plied yarn was washed and hung out on the back porch to dry. In weather that maybe got up to the 80's it took a good two days to dry. Today it's taking maybe 24 hours. Even better, I can view them from the interior of my nice cool house. I won't be getting up as Grumperella tomorrow.

For my other PDX buddies who don't have AC, I hope you find a cool place to spend the next few nights. It's gonna be tough. 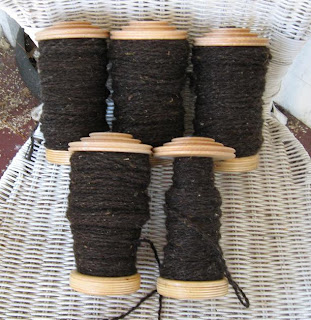 It's still daylight here in the west coast but the last of the Icelandic has been spun and plied. It will rest tonight as will my fingers. The roving escaped another mauling from the cats so I didn't have bits and pieces. There's a fair bit of vegetable matter I didn't get out but I did get quite a bit removed. These will be added to the other five skeins of spun Icelandic. I found a big ball of Shetland/alpaca blend in a beige that will work well for a contrast pattern for the yoke of the jacket I want to make from this yarn.

Now to finish a sock for Sock Summit 09. It's less than 2 weeks away. Whoo!

An end to the marathon 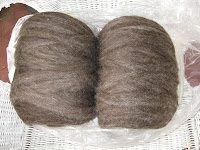 This weekend had one goal in mind: to spin up as much of the Icelandic as I could. Considering how out of shape I am I did pretty well. I completed the spinning up of the light Icelandic fleece bumps and plied them up. Three of my Louet bobbins are now stuffed with their plied yarn and will spend the next day resting before getting their twist set and hung out on the back porch to dry. Estimated amount of yarn spun this weekend: 19 oz. 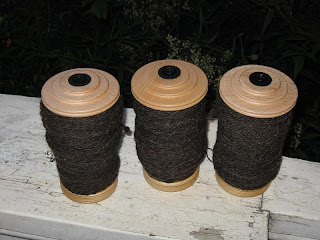 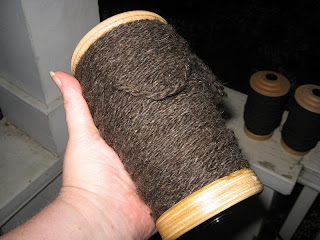 I still have the two bumps of the other Icelandic to spin and only up to the 26th to complete the spinning for the Tour de Fleece. A healthy chunk of it will be spent cleaning out the VM from it as it has much more than the lighter fiber. If the weather is decent in the evenings, I'll be doing that on the front porch as it's a messy job. If I don't drink coffee in the morning, I should have the energy in the evening to spin the product of my labors. Saturday I'll be volunteering at the Oregon Humane Society but will have time in the morning and evening. Sunday's wide open for finishing up the yarn.

I think I'll make it.

So here I was all gung ho for Tour de Fleece and what have I spun in the last week? Nothing! Outside of a very busy Wednesday evening that would have normally been spent spinning, I have few excuses. Part of the problem is that I've been dealing with some insomnia so by the time I get home from work I'm pretty much worthless. I could set up the wheel and churn out a few yards but by the time I'm through my email and dinner I'm ready to just sit and turn into a blob. (I did ply up the bobbins of the dark into yarn, but that took little time to do. I love fat yarn.) Tonight hopefully I'll be more productive since I got a full night's sleep last night and I have nothing planned for the weekend except for laundry. I'll borrow a bunch of movies from my neighbor and crank out bobbins.

An afternoon on the mountain 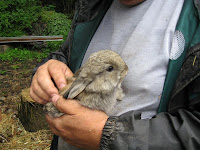 Today I took a jaunt east to Welches and Deb and Mark Accuardi's farm. Welches is west of Government Camp, the gateway to the ski resorts of Mt Hood. Deb invited me for a day of spinning with friends and if the weather was cooperative some fiber dyeing but rain came in. It wasn't bad though -- just a drizzle -- but it was enough that we couldn't do any dyeing. It was a pleasant gathering though of just the four of us with our wheels. 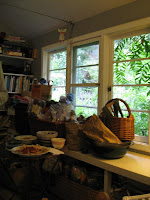 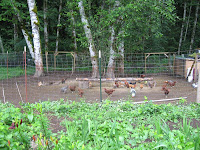 The Accuardis raise angora rabbits, pygora goats, and chickens. Mark took me on a tour of the farm so I got to see their set up. The goats were not happy about the rain so had to be coaxed out but the chickens didn't care. Some of the bunnies had been clipped but others still had their coats. They have a very nice group of furries, including their gray cat Julian who made the rounds of the spinners for scratching. 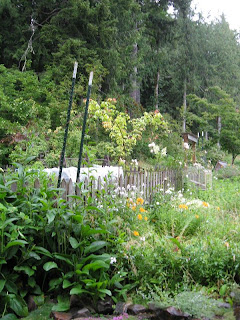 On the way back from Welches, I opted to avoid Sandy, which was in the middle of their annual Sandy Mountain Days, and Gresham, which in my opnion is the commercial armpit of the Portland Metropolitan area. During the summers when I was in high school I'd visit the house of my best friend's dad who lived out in the country between Sandy and Troutdale. It was an idyllic place and when I have the opportunity I take the back roads to revisit the area. I did that today and in the soft grey of the day the forests and hills were beautiful to see. It made for a very peaceful ending of the day.

Today I finished off one bobbin and spun up another of the lighter fiber. They will rest while I fill up more bobbins with fiber. To clear them up, I plied off the remainder of the dark fiber on the Louet. This week will most likely be that routine: fill bobbins, ply the singles, start again. So the next update will be next week. Spin on!

Today I took the plied yarn to work to swatch it for knitting into a sweater. I learned two things:

-- The dark yarn is the one that had sun damage. The yarn made solely from this fleece sheds during knitting not only vegetable matter that I was not able to get out during the spinning but also broken fibers, indicating it's not strong enough to work well as a yarn for a garment. They also create a rough fabric.

-- The dark and light singles plied don't shed. The fabric is softer. The color difference isn't too radical so it works well. However, the testing of the dark yarn makes me consider using just the lighter fleece for making a garment.

What do you think?

Posted by FiberQat at 9:05 PM No comments: 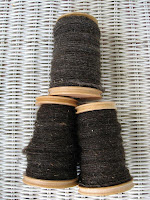 The spinning continues apace. I spent this evening finishing up a bobbin of the lighter fiber for doing some experimental plying later. I haven't decided if I'm going to ply one dark and one light single together or ply the colors separately. The color difference is subtle but enough that if I started a light skein after a dark there would be a distinct line. The lighter wool is not as full of vegetable matter as the dark so it's spinning up quicker. It'll come with me to Wednesday night along with bobbin number 4. 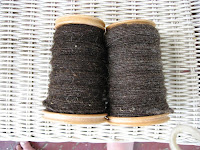 A box arrived with some things from Widget Supply. This fall during Oregon Flock and Fiber a group of us will be selling things under the PDXKB Co-Op. I may have some handspun but I'm also considering making orifice hooks for spinning wheels. The handles will be beaded instead of having a wood or polymer clay handle. I'll try to affix the beads closest to the end of the hook so that they don't roll around. The wire for the hook has been the challenge because most beading wire is fairly thin and coiled on a spool. I wanted wire that is straight and thick enough so that it can handle being shoved into an orifice without kinking up or bending but not so stiff that it can't be bent to the spinner's liking. I found the perfect wire: 16 gauge in a multitude of colors. I got some crimping pliers and crimps but the crimps turned out to be too small. They'll be used for other projects, but I'll need to get larger crimps for this project. 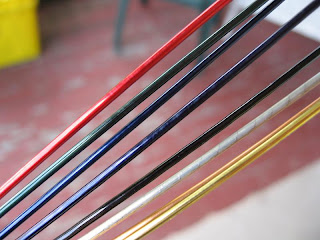 Posted by FiberQat at 7:57 PM No comments:

Yarn in more ways than one

The canteloupe Romeldale is plied and set. It came out uneven because of using the Journey Wheel with some sections thick and thin and the rest even at a sport weight. The color is pretty though. I don't know what I can use it for -- perhaps a child's sweater or hat. 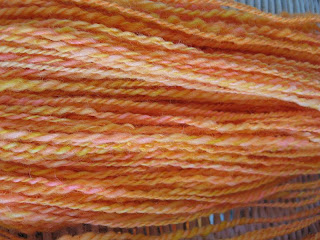 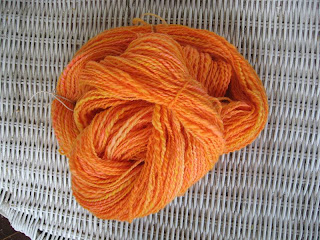 The first bobbins of the Icelandic have been spun and I have an idea of what I'll be doing with the two rovings since one's lighter than the other. I'll ply the lighter fiber with the darker to create a kind of tweed. There's a lot of vegetable matter in the fiber despite the cleaning so the challenge has been cleaning out the stuff while spinning it up. I'll most likely do at most one bobbin a day of spinning just to avoid straining my hands. 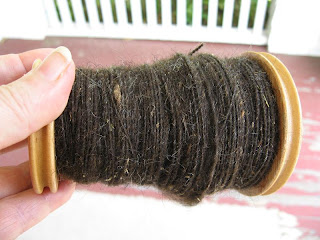 Posted by FiberQat at 5:08 PM No comments:

This year I've decided to join Le Tour de Fleece challenge now that I'm feeling more capable of producing even yarn. My challenge is to spin up this: 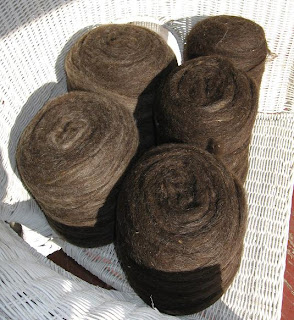 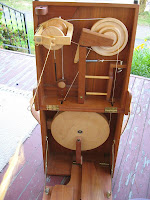 Prior to this I was enjoying the opportunity to use a friend's Journey Wheel. I had a bump of Romeldale subtly dyed up in orange, yellow, and pink that I called the Cantaloupe. I used it to try out the Journey Wheel and packed the entire bump (over 80 grams) onto the bobbin. If you've never spun on the Journey Wheel and get the opportunity to spin on one, I highly recommend that before you open the box that you read the manual that's on the Bosworth's website. When I received the wheel, it had a super strong draw and was on the fastest whorl. Adjustments on the drive belt in addition to the brake belt on the bobbin solved that problem. 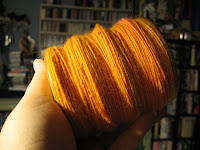 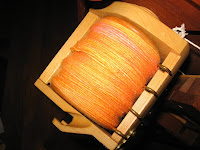 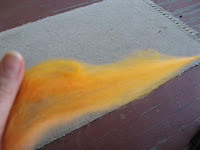 Posted by FiberQat at 9:09 AM No comments:

To all of my Canadian friends, happy Canada Day to you! I can attest that good things do come from Canada. Let me name a few.

So wave a maple leaf and be proud of your country! I know that the more I learn about it the more appreciative of it I become.