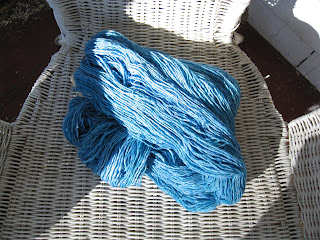 Today's the last day of the Tour de Fleece 2010 and I'm very pleased with the outcome. All the spinning I did ended up with a nice 3 ply sock yarn of over 500 yards. The hot weather we're experiencing this weekend made finishing up the yarn quick. What I like to do to finish my yarn is boil some water, take it off the burner so it's not moving, dunk the yarn, then drain. When it's finished dripping, I hang it up on the back porch. A few minutes later I check to make sure it's not hot to touch and squeeze the last of the water out. When it's 90 degrees it only takes a few hours to dry. 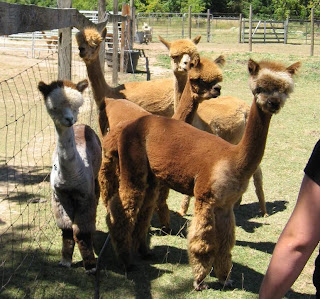 Yesterday, I went out to Islay Hill Alpaca Ranch to help them with a fundraising party for Farmington View Elementary School. They needed a couple of handspinners to show that process. Several families came with their kids and I came with my wheel, fiber, and a bunch of handspindles including some for the kids to keep. The kids were fascinated by the process and all wanted handspindles. Gail came too with her wheel. She brought a silk hanky she was spinning on and shared what it looked like and where silk comes from. At one point we went out to visit the alpaca herd and feed them carrots. As thanks for our participation, Jan and Jim gave us alpaca fiber shorn from a couple of their herd. Mine's a pretty chocolate brown that will make for a pretty shawl. 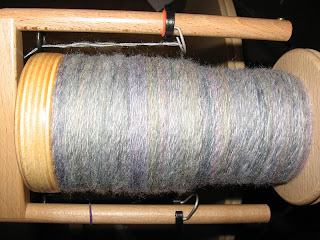 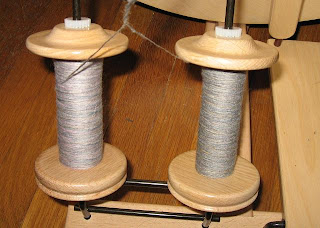 Posted by FiberQat at 7:00 PM No comments:

The summer time around here usually is bathed with temps in the mid to high 80's and endless heat. In other areas of the country they're socked in with awful heat but here in the NW we've been cooler than usual. For someone who doesn't tolerate heat well like me it's been blissful. The only problem we've run into is we've been bombarded with mosquitoes from the unusually wet late spring so being outdoors has been challenging. Thank goodness for insect repellant. 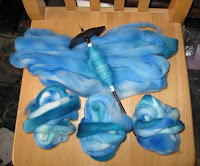 I'm coming down the back side of the Tour de Fleece 2010 with my challenge of spinning up 8 oz of Crown Mountain Farms polwarth on my Spindlewood handspindle. I've been able to keep up with my daily quota and am producing nice singles that I see being made into a 3 ply sock yarn. It's been a great challenge for me for honing my spindling skills and making me love my Spindlewood even more as a workhorse.

Last weekend I went to the monthly Northwest Regional Spinners Association (NWRSA) meeting at Shelia January's invitation and had a great time with the gals there. By that time I was getting cabin fever from being at home recovering from the crud so was grateful for the chance to get out and socialize. While I was there, I introduced myself and told them about me and my background. When the subject of spinning wheels came up, Shelia mentioned that a mutual friend Susan had her 30" Reeves Saxony up for sale and had offered it to Shelia. Shelia in turn said that if I was interested and could buy it she would pass her chance off to me.

For those of you who are not familiar with Rick Reeves, he is a wheelmaker who with his wife Marge made spinning wheels and tools from 1964 to 2001. Schacht currently manufactures a wheel that uses the Reeves design that I was looking at but the Reeves themselves no longer make wheels. There are a variety of wheels from traditional saxony styles to frame wheels and castle styles. They're beautiful wheels, loved by their owners.

When Shelia told me about the wheel, I was first amazed that Susan was selling it and second amazed Shelia was willing to give up her dibs on it. Shelia has a beautiful collection of wheels, including three Reeves wheels, so her generosity in giving me the chance to purchase the wheel was incredible. She told me the price she was offered and was floored. What I needed to know then was whether Susan was willing to accept terms. I drove home, flabbergasted at my sudden good fortune and hoped all would work out.

When I got home, I called Susan and told her what Shelia had told me. Yes, the wheel was for sale. Susan's got an order in for a Lendrum Saxony 30" so she was selling her Reeves. I asked her would she accept payments and she said yes. Easy as that. I screamed when I hung up the phone.

So in the near future, there will be a 30" Reeves red oak Saxony residing in my house. 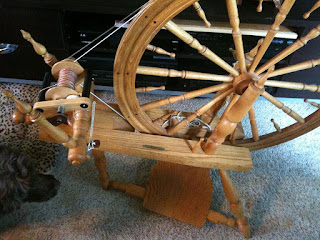 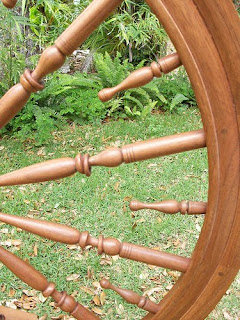 Posted by FiberQat at 8:57 PM No comments: 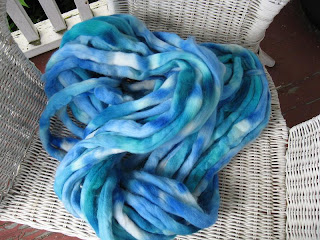 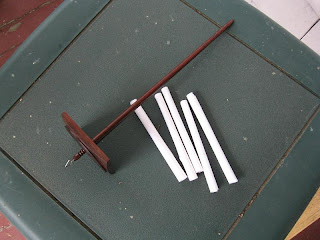 For the next 3 weeks I'll be spinning like a mad thing as part of Team Suck Less. My goal? To see how much I can spin on a handspindle. I'm a fairly fast spinner on the wheel but I've not done a full project on the handspindle.