If you've been a regular reader of my blog, you most likely have noticed that my output has gone down recently. When I had started the blog, it was intended to be a journal of my experiences in the textiles community and some personal observations. For the most part I've kept to that with my intention of posting at least once a week, usually on Sunday. Lately, however, I've been slowly drifting away from the blog posting. Part of it is not wanting to clutter it with drivel or the same ole same ole. Another part of it is I've been more active on other social media, namely Ravelry and Facebook. But I have no intentions of giving up on the blog. It's here that I can keep in touch with those who are not connected with me in those two resources.

The sudden loss of Maisie was difficult

. When you lose a pet that you've had for a while, it's a change in your life that has its ramifications. Maisie was kind of the grande dame of the house, anchoring the feline community with a quiet yet strong presence. Her disappearance left a void that the household had a hard time adjusting to. We are all getting used to the new rhythms and dynamic that multiple occupants work out in a living space. I felt the loss so keenly that I tried adopting another cat to fill the void but it didn't work out and have come to the conclusion that for now there will be two furries. 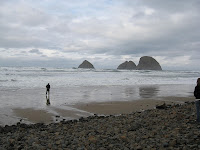 To cope with the depression that was trying to latch onto me, I decided last week to take a day trip to the beach. I invited Agent D to come along and he leaped at the opportunity. We went down to Tillamook and Oceanside to take in the calm of the ocean's roar. We made stops at the Tillamook Air Museum and the Tillamook Cheese Factory (it was alas closed to the public due to unforeseen circumstances with the water). A trip up to Astoria and a visit with my sister to see how she was doing then home again made for a lovely jaunt. March weather is fickle but we were graced with rainfree hours while we were out and about.