Then suddenly it's summer. Holy crap. 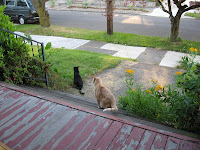 Well it's trying to be summer around here. While other areas of the country are suffering under heat waves and horrid temperatures we here in the PNW have yet to have had a day where we've even come close to 90 degrees. I'm not complaining because summer's my least favorite season but I'm sure hearing the griping amongst the hoi polloi for the lack of summerninity. You want summer? I suggest going to Texas for a few days. A little heat index of 115 degrees F will make you yearn for here. 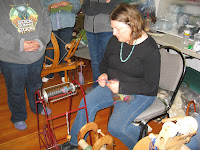 June was a fairly busy month for me, culminating in a trip to Mt Hood/Parkdale Oregon to attend a 4 day workshop held by Judith MacKenzie. It was essentially a free-for-all event where the students decided what they wanted to learn at the beginning and it went from there. To give you an idea of what we packed in those 4 days we did:

You can imagine what I was like when I finally left for home on the day 4. Exhausted but very very happy. I picked up all sorts of tips and tricks from her and have been passing them on to my fellow spinners. My spun yarn after that workshop has improved significantly.

I'm currently doing some spinning for the Tour de Fleece though my right knee has not been allowing me to do a lot of spinning. I'll be working to finish off a bobbin of three that I'm currently working on for a sock yarn. It's coming out beautifully. 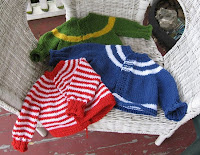 I've churned out more baby sweaters to eventually be sold for a fundraising. They work up so quickly and are fun to knit. I took the pattern and made some adjustments for my own liking and wrote it up as a free pattern on Ravelry, called Basic Yoke Baby Sweater 2.0. Others have tried it and enjoy it, which makes me feel good.

For my birthday I received three books: Knit, Swirl! by Sandra McIver, For the Love of Knitting by multiple authors, and The Fleece and Fiber Sourcebook by Deborah Robson. I was caught up in the thrill of the engineering of the Swirl sweaters that have come from McIver's book and started up knitting my swatch to get the right size. I even took it with me to Judith's workshop in case I needed something to work on in the evening. Ha ha fool me -- I didn't touch it because I was too tired. So I arrive home and work on it a bit (the yarns are Stonehedge Farms Shepherd's Wool with Dream In Color In Native laceweight in raspberry tones).

In case you haven't seen it here, I love lace. I'm a lace junkie. I love how it turns a pile of string all looped together that looks like a dog's breakfast into stunning beauty when it's all dressed. (That's right. Ordinary knitting is blocked. Lace knitting is dressed. Not that it's snobbish or anything.) You can bring me to my knees when you open up a stunning lace piece that looks like it's been knitted from frog hair on size zero^googolplex needles. 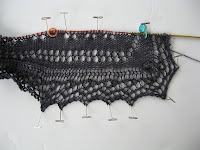 Frank has decided to go into lace knitting with a vengeance, coming out with a series of patterns that celebrate the women in his life. The one that made me drool was the one dedicated to his grandmother Jennie or as she was formally named Giovannina. I added that to my wishlist, not expecting to make it anytime soon, but an opportunity arose and I am now in the process of knitting it. The Filigran yarn is nice to work with and I'm making progress now with the body. We'll see how quickly I get this knitted up (the center motif requires 20 repeats of 30 rows).

Nothing new in the home front regarding the cats. Sammy is recovering from the state she got herself into from grieving for Maisie. Buster is finding that Fritz, while a fun playmate for a while, tends to be like the pestering kid brother and follows him around wherever he goes. 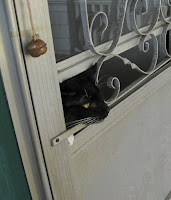 And Fritz? Well, let's say he isn't the brightest bulb in the sign. I like to call him a clown short of a circus. He's just now learning to come to his name but it takes a fair bit to do it. He hasn't figured out to leave Buster or Sammy alone when they cuff him and hiss. It also takes him a while to figure out that when I'm coming out of the kitchen and he's right there that to get out of my way he can turn around and walk faster (he walks backwards instead and is pretty good at it). But he's a playful, friendly, sweet-natured dope. He's figured out that he's not going outside without a harness on (which he doesn't like) so he doesn't dart out.

And that's the news from Chez Runamuck! Have a good summer!
Posted by FiberQat at 8:51 PM 1 comment: