Twice a year the chorus goes on a weekend retreat to work on the upcoming concert's music and bond with each other. Past years we've gone to Beverly Beach State Park and the 4-H Center outside Salem. The Center was nice and close, but we didn't have the bonding time we would have at the beach, so this year we went to Beverly Beach.

Oregon weather in October is always tricky. October starts off with warm days and cool nights, then the weather patterns shift and the rains start coming in. Beach weather is especially tricky. You never know if you're going to have a glorious sunny day, clouds and fog, or constant rain. We had a little of everything this weekend. The drive to the beach was dry and beautiful with all the fall foliage starting to fade from its glory. Saturday was foggy but cleared up a little. Sunday started with rain but ended with sunshine, making the drive back a pleasure. But it was guaranteed to have damp cold nights. 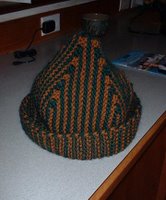 The yurts at Beverly Beach have heaters, so if you had a yurt you had warmth. However, there were more people than yurt accommodations and some of us, including myself, needed housing. I was willing to tent it but not looking forward to those cold nights in a tent, even with an air mattress between me and the ground. And don't forget the frozen trek in the middle of the night to the restroom. At the last minute, a friend of a friend came through with accommodations for me and my carpool buddy. They turned out warmer and drier than the park accommodations, so in thanks for the hosting at the last minute I made up a Tychus hat for our host. The retreat coordinator saw the hat and liked it so much that I have another hat on the back burner for him. Retreats are hard to organize well, so for having done his first one Don is getting one himself.

The Rogue is coming along well. I'm on the pocket now, working my way up gradually. The cables on the sides gave me a bit of a headache but I got past the crankiness.

Halloween is tomorrow. I won't be giving out candy, taking refuge in my house with the cats. We'll dress up at the office though and make all sorts of mischief. 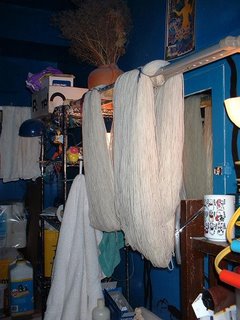 Another use for a crutch.

Remember the Pendleton wool? This is one of the spools of yarn unwound and drying after being washed to remove the coating for weaving. It's destined for being worked into a Rogue sweater. I'm taking a Rogue Knit-a-along class starting this week. This will be for me, a reward for whipping out a shawl in a month.

The foot is much better. The week spent in a wheelchair at work gave it the time it needed to heal. Last week I tested it and it's doing well. I'm taking care not to overdo it and ice it down when it gets too swollen. But I don't see surgery in the near future. Whee!!! 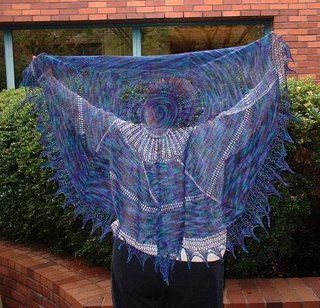 Thanks everyone who posted on my rant. Fortunately I work amidst fellow crafters who appreciate the work I've done and believe it worth every cent. The Bunny expressed interest in getting a ticket. The raffle is tomorrow at Providence Office Park at 1 pm, but I'm not in charge of tickets. I couldn't find your email link so email me directly at fiberqat@gmail.com before 7:30 am tomorrow and I'll send you the contact info of the ticket seller privately.
Posted by FiberQat at 6:26 PM No comments:

The raffle to raise money for the West Women's and Children's Shelter has been going on since Monday. Like many raffles, the start was slow but is picking up. Payday is tomorrow so we should sell more tickets then. I've been talking it up with fellow employees all over the building since half the battle is making people aware of the raffle in the first place.

One of the disheartening things I've been hearing (and confirms my reasons for refusing to sell things at bazaars, farmers' markets, and the like) is that people are dismayed at the value placed on the shawl. It's priced at $400 value which for some folks seemed horribly overpriced. One person commented she wouldn't have paid $30 for it. It's very insulting to me. I spent on average 20 hours a week for four weeks knitting it. Deducting $30 for the yarn and the time spent designing it, it works out to my knitting it for under $5 an hour. That's less than minimum wage. If you use the method of 18 cents a yard, it's $360. So bite me, cheap asses. 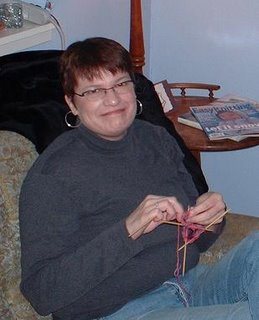 Portland's Indian summer finally came to an end yesterday with a steady rain and a distinct chill in the air that only a rainy fall day can provide. A good day to sit and knit and sip hot drinks. It was in that atmosphere that I met up with fellow listers Leigh, Gary, and Melissa at Mabel's Cafe. Leigh was in Portland on one of his many jaunts across the country, so we three got a chance to meet him. I would post the picture of him and Gary but it's an awful shot. I won't torture them; Melissa's pictures are much better. *wink* But I did get a nice picture of Melissa working on one of the afghan squares she's doing out of handdyed alpaca. We had a marvelous time chatting, showing and sharing projects, and getting glances from other knitters.

Since the shawl was done, I needed a project to work on while at Mabel's so I took along the Araucania I was going to use for Sock Wars and started working on the socks for NeedleGirl. By the end of work today I had the foot and heel turn done. The yarn next to the sock is the handspun NeedleGirl sent me (the chocolate's long gone). 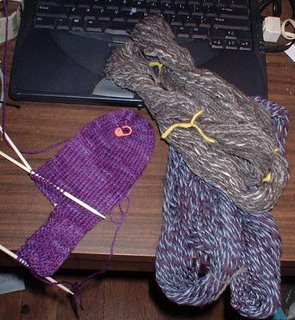 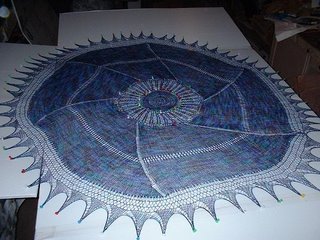 The Shelter Shawl is done and is drying from being spritzed and dressed. It's not quite 5 feet in diameter, so it's not quite as big as I would have liked it, but it's going up for raffle Monday. There is nothing quite so satisfying as finishing up a piece of lace and seeing it all spread out after working one's fingers to the bone and cursing on occasion when you do a pattern wrong. It's addictive. I'm basking in the post-FO high now mmmmmmmmm...

Where's that Rose Trellis Shawl I was working on earlier?

Coming up on the next FiberQat...

Sharon Rose aka NeedleGirl sent me some of her handspun and some nummy chocolate in return for my making her socks out of the Araucania yarn. I'll have to find a fun pattern to do the tops. She's promised me a ride in one of her Austin taxis when she comes in to visit Portland as well, so this will be well worth making her sockies. The yarn originally was going to go to Sock Wars but now that I've read some of the posts I'm glad I opted to drop out. So tonight I'll start searching for a pattern and take them with me tomorrow when I go out for choir practice and knitting with list buddies.

The end is coming!

I'm down to 4 rounds on the shawl. This weekend was a very productive one as I overdid it during the week and my foot is telling me I must slow down. It was while I was at work that I pushed the foot too far, fetching reports for month end. I now have a wheelchair at work (a benefit of working next to a medical equipment department) which is giving me the experience of what it's like being wheelchair bound in a walking world. It's been an eye opener. I've had to deal with my knees not letting me be as mobile as I would like to be, but this puts it in a different dimension. Try it some time for a day and see what it's like to be living below the usual level of eye contact and restricted in movement. My power knitting has given me the strength however to push myself down the long corridors. Cowabunga!!

How far am I on the Shelter Shawl? I'd put up a picture except that it's at the point where it's impossible to get a decent picture of it due to the number of stitches on the needle. Besides, the picture wouldn't have told you much compared to this.

The stockinette spiral section started out at 288 stitches per round. To complete it, I'm planning on doing 80 rounds. I hear you experienced knitters going tsk tsk, why doesn't she have a pattern in there instead of row upon row of dull boring stockinette? Because this is a speed knitting project and a pattern would mean I would have to devote more attention to what I am doing instead of doing the knitting while I'm doing something else. I can knit stockinette without looking at my hands. The points where the spiral increases are going in are marked with markers so I don't miss those points.

So 80 rounds of stockinette. What does that mean stitchwise? It means that the final round will end up being 768 stitches. I'm at 606 stitches now. If I do a little over 1500 stitches a day, I'll have that section done in time to do the edging, which is a 12 row repeat (I'm doing it sidewise). I have 12 days of knitting left (not including the day of blocking).

If you're a regular reader, you probably recall that I have problems at times with tendonitis in my hands. A speed knitting endeavor like this could do some major damage if not done right. But proper care and maintenance helps keep my tendons from being damaged. It's like an athlete taking care of his/her body, only in this case I'm working with just my shoulders, arms and hands. I've done enough knitting to have developed my muscles in my arms to the point where I have pretty good tone for someone who overall is in poor athletic shape. Muscular enough to scare my boss *BEG*. So far I'm doing well.