I like to share my love for my hobby with people at work. They marvel at the things I do with colored string and animal fuzz and wormspit. I share the yarn I get from my dyer friends because I love the stuff they make and others should see it. The colors are far from bland and delicious.

Today I brought a skein of StitchJones' Titanium Sock done up in Shock Treatment in a nummy rich purple. I got it last night at knit night at Whole Foods for the Conspiracy KAL the PDX Knitbloggers are doing. I wasn't sure about the color when I selected it because the picture of the dyejob made it very violety purple, which is fine. This is more on the reddish side of purple. If you had the Crayola 64 count crayons it's between violet-red and mulberry. Gawrjuss stuff.

So why is there no pic of it? I didn't have my camera with me. But I had this skein of yarn wanting to be touched. "Unwind me," it murmured to me. Because my left shoulder's been cranky lately from overuse, I thought, OK I'll start wind it up into a ball instead of knit during break.

I don't have a ball winder at the office or a skeinholder. It was going to be all by hand. No problem. I opened up the skein, gave it a few good snaps to straighten out the yarn, and laid it open on the table at break. The first tangle hit about 1/3 of the way through. No problem, I thought, I'll just carefully work the ball through the tangle, give the skein another snap, then continue. Nope. It tangled further. Then it was the end of break. I carefully folded up the remaining skein, tangle and all, and put it away.

I worked on it during second break but didn't finish. There was too much of a tangle to be handled in 15 minutes. But I didn't want to take it home still unwound. I don't have much surface space for unwinding yarn or good light. The good light was at the office.

At the end of the day, I took out the skein and laid it on my desk. Plenty of space there and good light. I untangled patiently. It's really pretty purple. I read a little of blogs when I had a tangle worked out and could slowly unwind from the skein. Those were the keys: slow speed and patient untangling. I finally finished winding up the ball....

No regrets. It truly is a pretty purple. 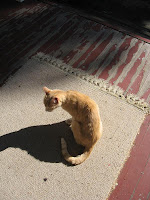 The weather has been slowly changing for the cooler days of fall. I've already noticed some trees changing color, which is early for here. The unseasonably cooler year I'm sure had something to do with it. It'll be interesting to see what happens over the next few months. Will there be snow in November? We'll see. The furries are enjoying the sunshine today. It's going to be a nice Sunday for loafing and crafting. 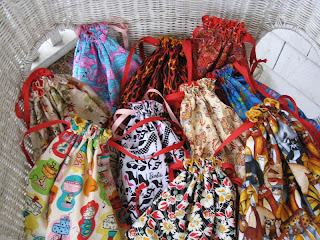 I've been getting ready for events coming up this month. On Sept 18th I'll be at the Hillsboro Civic Center with my peeps to observe Worldwide Spin In Public Day (WWSIP). I'll have my carder there to demo the use of a carder for blending fiber. I've been busy making things for the event and will come with precarded batts and handspindles for kids. The bags for goodies have been completed and will be delivered on Wednesday. If you're a spinner looking for a fun time, come on down to 150 Main St in Hillsboro. The Farmers Market is also going on that day so there'll be fresh food and goodies. 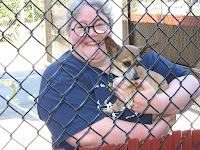 Yesterday I and several from my office went to the Oregon Humane Society to help out with socializing with the animals who are waiting to be adopted. There are many cats and dogs waiting to come home with someone. We played with some of the dogs and cuddled and stroked some of the cats. Not every cat was wanting to be cuddled and one in particular was brought in, terrified at the changes. I made sure that little girl had a good hiding place to let her calm down. If you're looking for a new addition to your household, please contact me. I have a discount coupon good for the next 90 days that can be used toward the adoption fees. I know there's one old gray furry I wanted to take home but it's not possible for me to take on any more furries here in Chez Runamuck.