The last time I posted it was the beginning of the Olympics and the parallel events of Knitting Olympics and Ravelympics. In past years I've been an enthusiastic participant but this year I've had a few challenges. A deadline for a project kept me from pulling two weeks out of the knitting schedule and illness in various forms interfered in other ways. So consider me the knitting athlete whose medal dreams are sidelined by the vagaries of nature and time. There will be other opportunities.

This year's broadcast of the Olympics disappointed me. There were too many commercials, too many cuts from one sport to another, and too much commentary during the events. I was glad to be able to watch the curling but at one point I was so annoyed with the commentary I turned the sound off. There is word that ESPN is vying for the next contract for broadcasting the Olympics. I hope that if they succeed they do a better job of broadcasting. NBC was awful this year.

Last weekend the NorthWest Regional Spinners Association had their board meeting at the Aloha Grange so there were vendors and a spin-in. I had a good time meeting up with a number of my spinning buddies and partake of the wares of local vendors. I found some beautiful fiber for future batts; silk hankies and a bell; angelina fiber in copper, red, and purple; targhee and merino/silk blends in warm browns and gold. 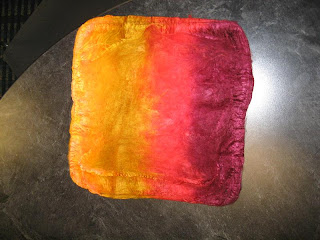 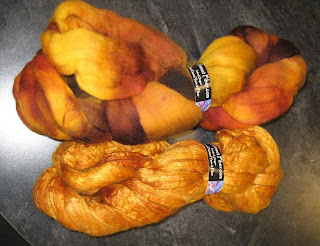 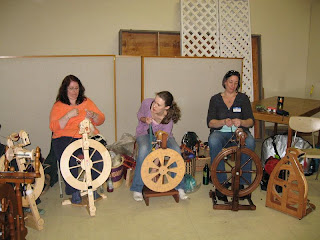 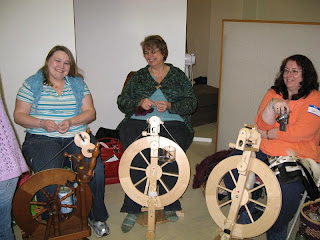 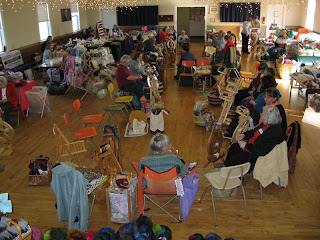 Last weekend was also a time for getting together with friends. Saturday morning I met up with a friend I hadn't seen in a couple of years for coffee. He was dealing with the aftermath of an accident where he had been struck by a car while crossing the street. It was great to see him though I missed seeing his wife who was ill with the crud. We had spent many fun times together camping and partying so it will be great to be back in contact with them. Sunday was my monthly pinochle group which started with a potluck of nummy roast, root vegetables, salad, and fresh bread from Grand Central. While it was marred with a last minute catastrophe in the basement when a pipe clog forced our hosts to shoo us out of the house, the pinochle gods were in my and my partner's favor, granting us three sets won.

Update: I finished the pattern write up I needed to do including the charts just before the closing ceremony began. It hasn't been tested but that it's completely written and charted was one goal I wanted to meet during the Knitting Olympics. Ooorah!!

Posted by FiberQat at 9:19 AM No comments:

It's been a while since I've last posted. Two weeks ago I was busy tying up the loose ends of the project I had been working on at the office and coming home exhausted. When all the processing for the month was done I took some time off and went to the beach. It was the break I needed. 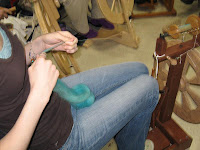 The beach trip centered around the Newport Spin In hosted by the Northwest Regional Spinners Association(NWRSA). It's an annual event sponsored by the chapter that had vendors from around Oregon as well as a gathering space for spinners. I had my money from my scarf commission to play with so I could indulge and help support local wool farmers. 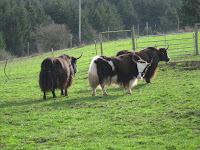 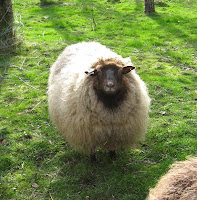 I left work early on Friday so I could meet up with Shelia at her farm outside of Newberg. I had never been out on her farm before so it was a real treat to get to meet her in her milieu, replete with spinning wheels, fiber, and animals. She raises sheep, cows, chickens, and yaks on her farm set on the side of one of the hills of Chehalem Valley and surrounded by vintners. 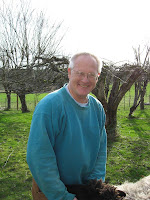 Adam, her husband, was out and about doing farm chores so I got to meet him while I was there. He resembles Tim Gunn from Project Runway with that Nordic appearance. I saw most of the animals but kept my distance from the yaks, not knowing their temperament around strangers and not being very nimble to avoid their horns.

We headed west then south to Lincoln Beach where we were to meet up with our friends Tammy K, Tami H, and Sara at Tami H's aunt's beach house. On the way, Shelia and I stopped at Nestucca Bay Yarns while we waited for the others to catch up. While there we got to chat with the local knitting/spinning group that meets on Friday evenings there. They have a very nice selection of yarn so if you're in the neighborhood, swing on by. Finally, we hooked up with the others and reached the house. It was very comfortable and spacious, and soon we settled down to eating dinner then sitting around to knit and spin. As with all beach trips there were snacks and lots of great conversation. We even have an Finished Object! 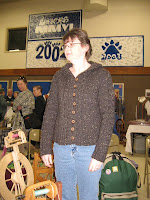 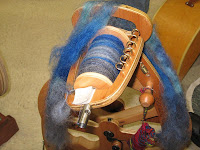 The next day we headed out to the high school where the Spin In was being held and settled down in one of the circles. Other NWRSA members who were familiar faces came and joined us with their various wheels. There were many Lendrum folding wheels and a fair number of Ashford Travelers, Ashford Traditionals, and Schacht Matchlesses. 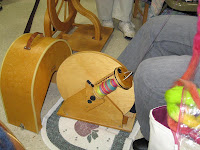 There were other wheels, though, that one rarely sees. One vendor had her Ashford Country wheel, which is mostly used for spinning up bulky yarns. There were a number of antique wheels as well. One of our circle had a Louet S45 "Hatbox". Two owners found that they had similar wheels and one conferred with the other as to how to correct an issue with her wheel. A few folks had their handspindles too. There were also door prizes and trivia contests. Tami H came away with a seat cushion and Sara won a sweater pattern from Norsk Needleworks. A fun filled day. 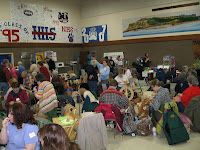 There was a variety of vendors there ranging from a couple of the larger commercial merchants I've seen at OFFF to smaller merchants and local breeders. Norsk Needleworks has patterns for Norwegian style garments (I purchased this one from her). Another vendor was selling the fleeces from sheep raised as 4H projects. Another sold batts done up to create self-striping yarn with long color changes. All surrounding the center which held about 100 spinners all chatting and producing yarn. I found a couple of fleeces and some Ashland Bay roving the same color as roving I had received at Sock Summit.

The Winter Olympics are in full gear up in Vancouver BC and so are the Knitting Olympics and Ravelympics. For those of you not familiar with those, the Knitting Olympics (hosted by the Yarn Harlot) and Ravelympics (hosted by various folks on Ravelry.com) are challenges to crafters to set a goal (such as knit a sweater or spin a particular amount of fiber) to be completed during the Winter Olympics. The project is to be started at the time of the lighting of the Olympic Flame and completed when the Flame goes out at the end of the Games. In 2006 I knitted a sweater. This year I have a commitment that I have to work on in private but I do have a project for my public knitting: a pair of socks. If I am able to complete one project I'll be pleased. If I'm able to complete two, even better.