Rhinebeck, the informal name of the NY Sheep & Wool Festival held in mid-October, is one of the biggest festivals in the US for handspinners, weavers, knitters, and producers of fiber. It hasn't really been on my radar in past years, but a gentle nudge from the Knitting Curmudgeon encouraged me to look into going. A number of folks I'm acquainted with through the Web meet there on Saturday, plus there are folks I know who are vendors there. So this year my goal has been to save enough to go. I've been watching the flight prices and scored today with a flight with Delta to Albany NY. Squee!!

On the knitting front, I finished my second chameleon, this one in Abstract Fibers SuperSock in colorway Burnside Bridge. It's half the size of the first one I did. I like the blue. 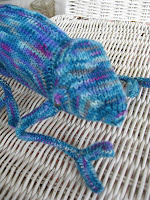 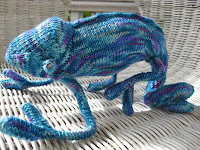 Happy Father's Day to all the fathers, grandfathers, uncles, and other men out there who give joy, security, and comfort to children. There are few things quite as tough as being a Dad. It's a job that once started has no ending but the rewards when you succeed are indescribable. There's no manual -- just the guidance of other dads if you're lucky. I didn't know my dad well but I treasure the moments in my childhood when we did connect. What he gave me was the confidence to move forward, compassion and respect for those in need, and an optimism that helps get me through the rough times. Thanks Dad. 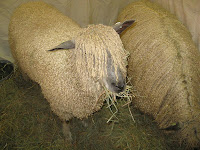 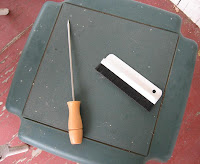 The annual Black Sheep Gathering in Eugene was this weekend and it did not disappoint. Mostly geared toward spinners and weavers, it had plenty of goodies for folks to choose from. This year I was focused on finding tools that I needed for my drum carder and looking for bargains. I came home with a doffer, a tool like a large awl used to remove batts from a drum carder, and a flat brush I can use to smooth the batt on the carder. Visits to my favorite vendors -- Blue Moon Fiber Arts, Dicentra Designs, Crown Mountain Farms -- came away with goodies. 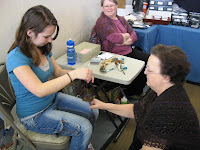 When I hooked up with my friend Barb, she was busy selling handspindles for Steve and Connie of Spindlewood. I stayed with them but not without walking away with another handspindle which I promptly put to work. People came by and watched me spin away on this pretty little spindle. 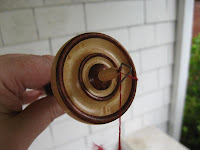 I didn't go down alone. Cindy, who is in the process of starting up a shop in the Pearl, did the driving and was focused on finding sources of fiber and yarn. She was a BSG virgin, so she prepared beforehand with a printout of maps and vendor information. She did exercise restraint and came away with a fistful of cards. She knew that as a shop owner she could get the materials later to play with. [BEG] 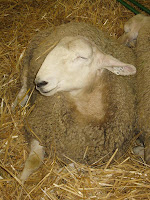 This guy had been fed and was placidly chewing his cud. Such a picture of contentment.

I celebrated my birthday this week. Not a lot of hoopla but had many well-wishes. I went out to dinner and enjoyed a delicious steak at Sayler's Old Country Kitchen. When I came home I found my internet access was down, so the next morning I took my netbook to work to catch up on my email. It was a very pleasant surprise to find over 60 emails waiting for me, mostly birthday greetings sent to me via Facebook. It was very sweet. My friend Linda did leave a goody bag at the office for me. She's such a card. One of the sheep she gave me looked like he could be a pilot. What do you think? 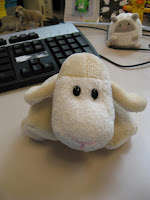 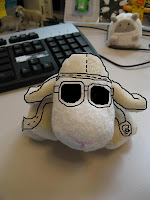 My birthday wasn't the only birthday lately. Agent D had a birthday before mine and he was not feeling very good about it, claiming it was his entrance into fossilhood. During breaks and lunch I worked on that depression along with a special project. On his birthday, he received his surprise and the delight he expressed was worth all the crafting. He had seen the project in progress but he had no idea it was going to be for him. Tee hee! So folks, meet Walter the chameleon. 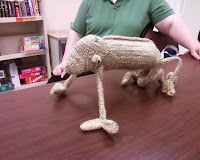 It's been over a month since I wrote here. May was a very busy month so that by the weekend I was tired, but at the same time there wasn't much blogging fodder to put out. It's better to be silent than populate this with "I knitted on this and dealt with my health" every Sunday.

On the crafts front, I've been working on some crochet projects. I haven't been crocheting as long as I have been knitting, so these projects have been my means of gaining skill in that craft. My crochet hasn't been fancy -- washcloths and afghan squares -- but I'm getting better at keeping an even edge on the squares instead of coming out with trapezoids and quadrilaterals. Not much spinning. Still working on the Briar Rose BFL. (See? Blah blah blah.)

So what's been on my mind lately? Baseball. I've had an on-and-off affair with it since I was a kid. I couldn't play well -- there weren't many around in my neighborhood to play all the time in the summer -- but watched it with my dad. It was the one thing that the two of us enjoyed and connected with. Dad would tell me how wonderful Babe Ruth was to him when he was a kid and at one time was president of the local softball association. When Willie Stargell and the Pittsburgh Pirates came to Portland to play against their farm team, the Portland Beavers, Dad took me to see them play. I remember sitting in Civic Stadium with him, watching the game and being thrilled to see a major league team. We watched the 1975 World Series together, Red Sox vs Reds (I can still name most of the players for the Reds). He got me my own glove and I played in the street with my brothers' bat, the handle taped up with electrical tape because it was split. The big manhole cover was home plate and water meter covers on the left and right were third and first base. We figured out which stone in the street (the surface was a mix of rocks and cement) was second and we had a field. I never really played it at school because I was too conscientious of my lack of physical fitness. But it didn't stop me from loving it.

Now that I've grown I've reconnected with baseball. I didn't do so very much in the 80's but when Ken Burns produced his documentary "Baseball" I recognized something that I liked in childhood. My favorite players during my childhood were Pete Rose and Reggie Jackson, and I once did a book report on Lou Gehrig. With "Baseball" I learned about the other greats in baseball: Ty Cobb, Honus Wagner, Walter Johnson, Joe DiMaggio. I learned about the Brooklyn Dodgers and their connection with that borough. The history of baseball and its many stories of heroes both regal and fallen opened to me. And I learned about the Boston Red Sox.

If you had asked me about the Red Sox a few years ago and how I felt about them I would have shrugged. Yes they were an old team with a history that could be the makings of a soap opera. At the time I had no team affiliation so could take it or leave it. But when I make a couple of trips back east and hooked up with a number of New England knitters who were also baseball fans, I discovered the Red Sox Nation. Their finally winning a World Series after nearly a century sealed it. Not only did I have a team but I had compadres. You can't truly enjoy a sport unless you have fellow fans to feed that enjoyment. Who else would understand your mania?

I have been to only one Major League park and game and that was the NY Yankees vs. the Seattle Mariners at Yankee Stadium (that was a thrill, lemmetellya! Seattle won too. ICHIROOO!). But some day I will go to Fenway Park to see the Red Sox. It won't be this year -- by the time I go east it will be World Series time or it will be over. But I want to go to Fenway. I want to see Youk and Tek, Drew and Big Papi. Anyone game?

Posted by FiberQat at 8:17 PM No comments: