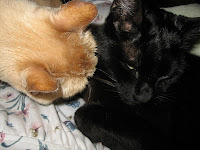 Each weekend I've been busy doing something and think briefly, I should update my blog. It's been a while and not everyone is on Facebook or Ravelry. But just as quickly it leaves my brain and before you know it another week has passed. Or my case, two months.

I've found as I've gotten older that unless I set out reminders for myself or stop and think for a minute beforehand what I must do I tend to flit from one thing to another at the cost of paying attention to other things that should be attended to. If I have things written down and go over them first thing in the morning I'm very good at getting them done. But if it's not on the list and I don't add it, it will be forgotten. Unfortunately, the blog writing has fallen into the category of not being put on the list. I will try to do better. 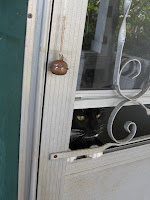 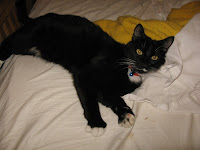 Things have changed a fair bit here at Chez Runamuck. I found a young cat that fit the household dynamic a month ago. His name is Fritz, is a year old, and has made friends with Sammy and Buster. Fritz isn't a lap cat but he is affectionate, a chatterbox, and has found all the toys in the short barrel tower. His favorite is a furry mouse that came in a gift pack I received from my Secret Santa last year. He carries it around in his mouth, plays with it on my bed, and has chewed the tail off of it. The other two weren't sure at first but Buster found him to be a fun playmate and Sammy has taken to him as a housemate. It's made life around here comical at times as the chasing goes on in the evening with either Fritz chasing Buster or vice versa.

In April I went to a fiber festival in Hood River. It was the first one for this particular group and they had a great turnout. There were some beautiful things there and I didn't come away empty-handed. One of the things I was looking for was purchasing a Schacht Matchless wheel on layaway. I had my Louet S10 for putting down as a down payment and wanted to pay off the remainder in installments. I found a buyer and the wheel is now being built. I was able to negotiate having the wheel available for my upcoming workshop at the end of June but I have to return it until it's completely paid off. I got the chance to work on someone else's Matchless while I was there and I was very pleased at how well it spun and fit me. So I'm anxious as ever to get it paid off and home! 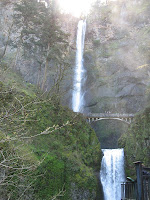 May has been busy. I volunteered some time to demonstrate handspinning at the annual AgFest in Salem OR. That was fun showing how yarn is made from animal fiber. The kids were delightful to watch. Agent D and I took advantage of a beautiful Saturday to go to the Gorge and take pictures. The water from all the rainfall made the waterfalls spectacular.

One of the things I've been doing is preparing for a class on making toe up socks. I've knitted up sample socks with three different toes and heels to demonstrate different methods. In addition to those I finished a hat for Agent D and a baby sweater for one of the gals in the office who is expecting her first. There will be more baby sweaters coming: one for the grandson coming for one of my partners in crime in my unit, the others for sale to raise money for Outside In.

June promises to be a busy month. Between teaching, taking Judith MacKenzie's workshop at the end of the month, and my birthday, my challenge will be pacing myself so that I can get everything done. Summer's almost here which will mean hiding in my cool house.
Posted by FiberQat at 2:52 PM No comments: